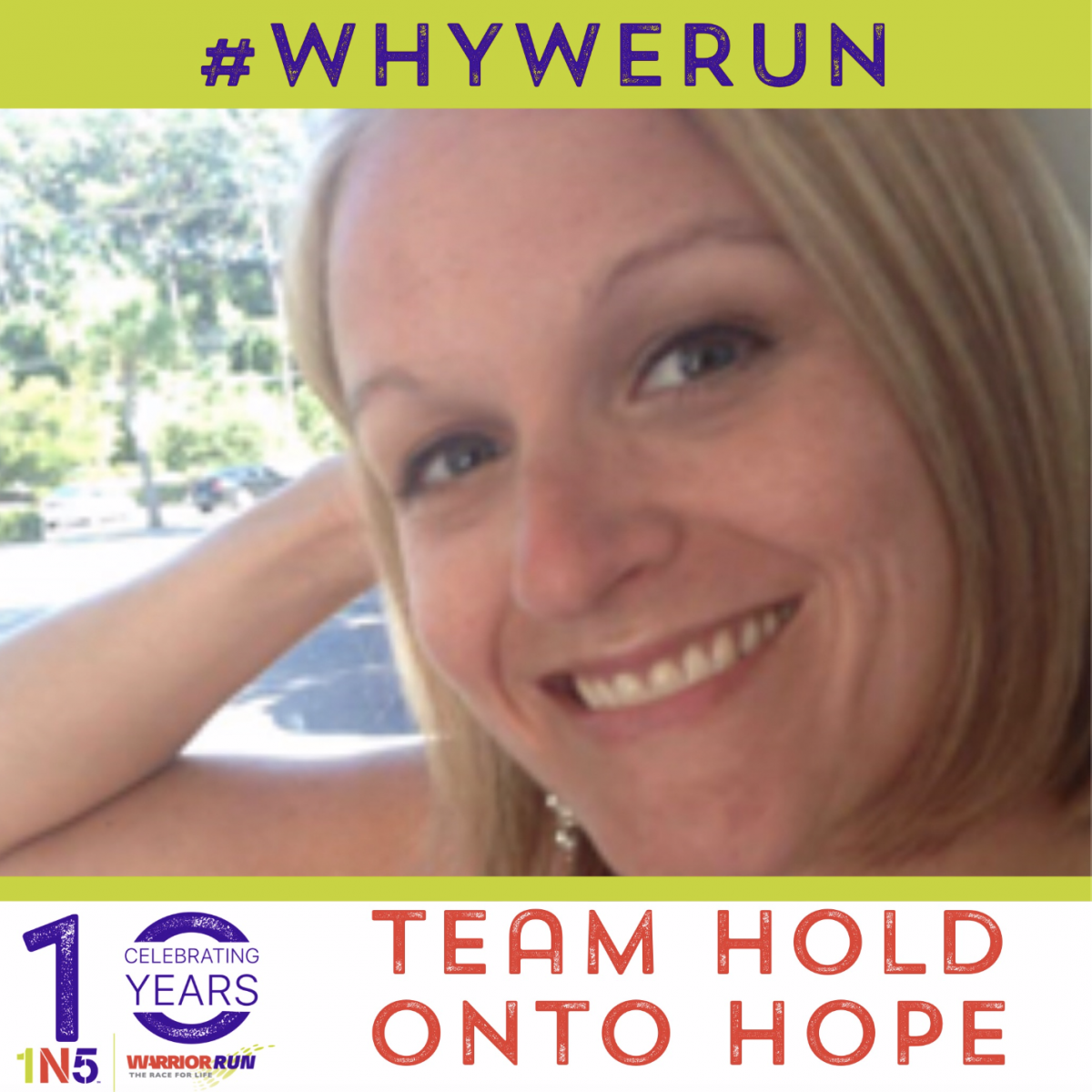 It’s #warriorwednesday, and Jillian’s will be the last #whywerun story before the Warrior Run!

I started running after my sister Beth passed away from suicide on November 5, 2016 at just 34 years old after a long and debilitating battle with depression.  Shortly after her death, I gave into a friend who wanted a running partner. I hated running, loathed it. Maybe I started because I was missing my sister, my best friend, and wanted to fill that void and be with a friend even if it meant doing something I hated. It was during that run, my first real run, that I decided to take the plunge and do the 5K Warrior Run. Ok I know it’s not a marathon or even a half marathon but a 5K was a pretty big deal for someone who never ran. When I say that I am going to do something I usually can’t back out; my pride holds me to it. I told my friend about my plan. She told me she would be there right with me. Done deal. Last year I ran my first race for my sister. Our team “Hold onto Hope” was one of the teams with the highest amount of donations. We ran to celebrate her life surrounded by friends, family, and like-minded individuals whose goal is to raise awareness of mental illness and suicide.

I credit the running to my healing, especially since this wasn’t my first loss and in many ways were quite connected. I had lost my dad just one year and four days earlier, unrelated to mental illness, but likely a precipitant of Beth’s suicide.  Being alone in my thoughts, connecting to them spiritually, using their memories kept me moving forward. I used my sister’s pain as a way to get over the difficult plateaus of running thinking, “If my sister had to live in such pain, there is no reason I can’t get past this physical pain”.  Also, the best thing I could do during this healing period is to do something productive in my sister’s memory, not allowing myself to become lost.

So many individuals are affected by mental illness; some visible with outward signs, some not so visible. It isn’t treated or accepted the same way as physical diseases. People are ashamed, embarrassed, and fearful, all because they have a disease affecting their brain.  Most people suffer in silence because of this fear, my sister being one of them. It affects people of all walks of life; rich, poor, all races, all creeds, all professions. It does not discriminate.

Beth graduated with a BS in psychology and a masters in psychology with dreams to help children who suffered from various mental illness. She positively affected so many lives, succeeded in many professional positions, and was considered an integral part of the team before the disease left her unable to function anymore. Standing by her side through this battle with her own brain and watching a beautiful, strong, highly regarded professional women become so broken by depression was incredibly challenging with feelings of helplessness.  Multiple treatments were used but she was refractory and left with the unpleasant side effects. She had lost all hope to ever get better, to ever feel happiness again.

This area of medicine is extremely difficult. There are very few diagnostic tests that offer answers, the cost of treatment is incredibly expensive, insurance does not cover a wide range of practitioners, the side effects of treatment are very unpleasant, treatment can be a lot of hard and emotionally painful work, and the stigma.  Why can survivors of cancer, stroke, heart attack, premature birth proudly wear t-shirts and post bumper stickers, proud to say they are survivors but those of mental illness cannot? Much of this race is not about the money, it’s about breaking the silence of the stigma, realizing that anyone can be affected by this illness, and that they are worthy of love, respect, and most importantly understanding just like everyone else.

We had many conversations about hope throughout her illness. Just a few days before Beth’s passing, she told me she was losing hope. I told her to hold onto hope, and even if she didn’t believe there was any hope to hold onto, to hold onto the hope of hope.