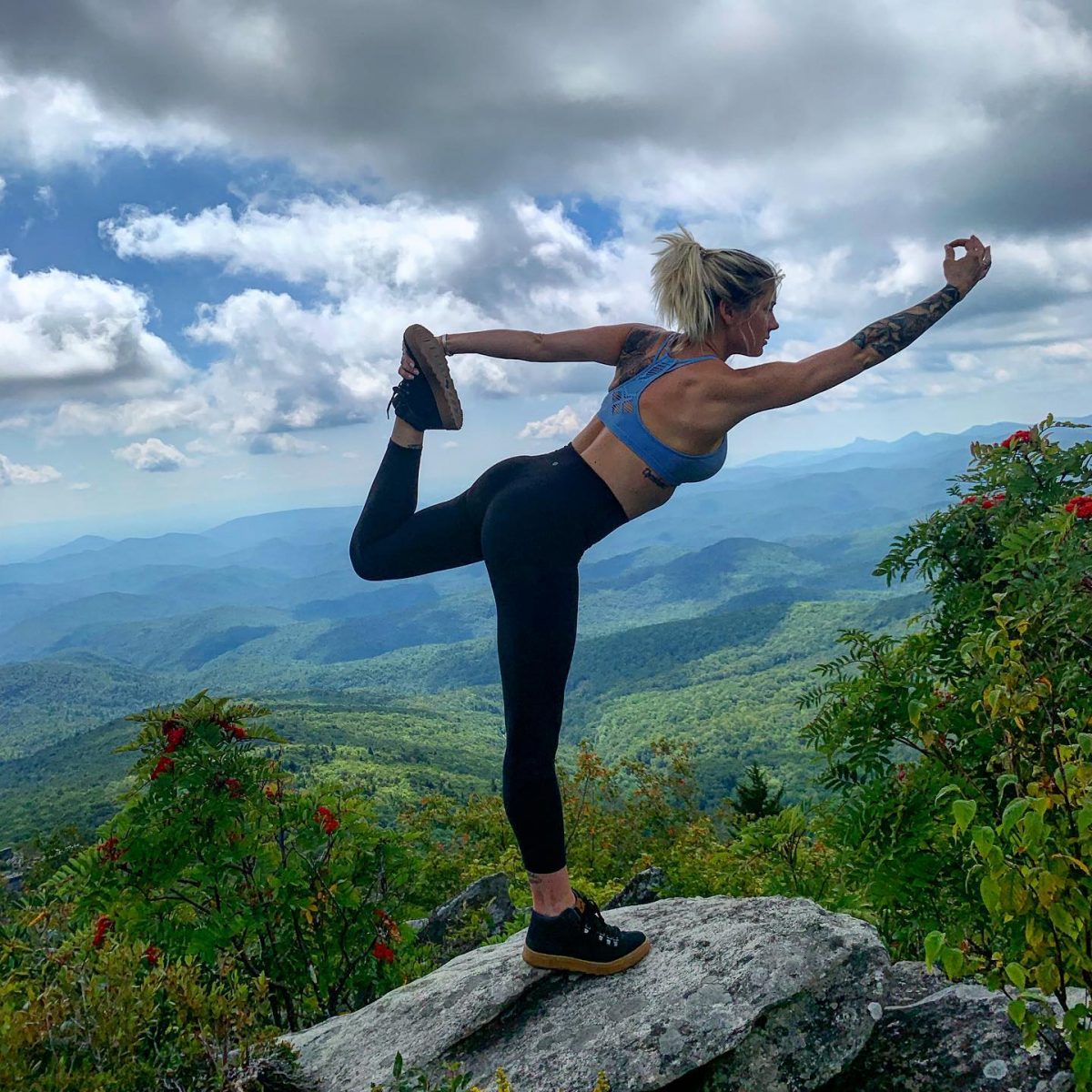 This week for #WarriorWednesday, Katy Turner is sharing her story of living with alcoholism, addiction, disordered eating, and suicidal thoughts and actions. She is now 5 years sober and living her life to the fullest. Check out her story below, and feel free to follow her new recovery Instagram page, @eatthedamnpie to follow her journey with mental health and wellness!

Where do I begin?

The only thing that really matters about my past is if I choose to stay stuck in it.  Sure, we all have a windy story. I played the victim to mine for a long time. The truth is, I was soul-sick and that is no one’s fault.  Not even my own. It’s just my natural disposition, and I tried to fill the hole in the soul with lots of different solutions, all of which I discovered were only ever temporary, and some were more detrimental than others.

To paint you a bit of a picture,  I’m from a nice Cincinnati family. Grew up very comfortable with material items, although uncomfortable emotionally. My house was a bit cold. I used to have major resentments. I can still have them creep up, but since getting sober, I’ve been given all these amazing tools to work through them, and frankly, my sobriety depends on me doing that continuously.

I went to Walnut Hills High School. I was a “C” student at best. Fierce on the soccer field and loved to write about anything that had nothing to do with school, and those were about the only healthy things I enjoyed.  The rest was Adderall, cocaine, whisky, cigarettes, crappy beer, hating my body and craving your approval.

The amount of medicine that I was prescribed for my ADD definitely fueled my interest in cocaine. By 16-years-old, I was addicted to cocaine because it kept me from eating, it cosigned my bad attitude, and it got me the attention I wanted. I was expelled from high school for a whole mix of things, but did graduate online from a virtual school.

I remember hating myself. Come to see that this wasn’t the only time in my life where that would happen. Suicide was always an option and the thoughts ran through my mind daily. In 2014 I attempted suicide, and obviously it didn’t work.

I remember being 12-years-old on the soccer field of this elementary school beating the crap out of this older kid and the boys my age cheering me on. That was it. I had arrived. I didn’t think anything of my body at that age. I obviously observed being bigger than the other girls around me, but I didn’t dislike it until I started pairing image with attention. I saw that the boys wanted those cute tiny girls. They weren’t attracted to me. And I wasn’t in control of how tall I was. So I did what any 12-year-old girl would do to get their attention…began to fight like they did, or worse.

When I was 14, the weight began to drop off due to the Adderall. I made the Varsity soccer team as a freshman, and again, I had arrived. I started getting all the attention from the older boys. I “dated” an older kid, and that’s when I was introduced to cocaine. I snorted anything I could. I liked the act of it. The experience. The drip. And the misery that came after.

My tolerance for pain is abnormally high. Physical pain meant nothing to me. I was the kid that would constantly test my pain tolerance. Grabbing lightbulbs to see how long I could hold on. The one thing I absolutely could not handle in any way was heartache. When I was 16, I could feel that my heart had shattered into what felt like a million pieces. My home was scary and I chose “fight” instead of “flight” and instead of weeping, I became numb. I shutdown. It’s the only way I knew how to deal with the world. My reality was so dark, and it became normal to me. The chaos became normal. The pain became normal.

To sum everything up, the ten years that followed were a series of external experiences that I thought might fix me. I joined two different branches of the military before the age of 24. I moved up and down the coast, East to West. I dated Lord knows how many different guys. Nothing was “fixing” me.

In 2011 when I got out of the Coast Guard, I developed another bad eating disorder in the form of Bulimia.  Before sobriety I would have told you it was because “he” wanted me to look a different way. But that’s one of the many lies I told myself. “He” never asked anything of me when it came to my looks. I just was looking for reasons as to why my life kept crumbling down. I was bulimic for another six years. I was bad off. I was miserable and kept praying to die in my sleep and never wake up.

I got sober in January of 2015. There is zero explanation for why a combative, raging drunk would put down her drink and go home. However for another two years the bulimia worsened. Just like the drinking had progressed. I was throwing up throughout the day, peeing blood, throwing up blood, my nose was constantly gushing blood. I hadn’t eaten a meal successfully in years. At different times, I couldn’t even hold down a carrot.

Then, just like the drinking, there was some sort of divine intervention, and one night I ate food with my friends and didn’t throw it up. I’m not a person of religion—although I did grow up going to church—but I do believe in God. So many “things” have happened that I just can’t explain. I was far beyond any sort of human aid. I needed a spiritual shift. I needed to get out of the way and make space for God. I needed to surrender. Then I needed people who were just like me, but who had recovered. People who know how to live life. People who woke up with a mindset of gratitude and not fear.

I’m coming up on five years sober. I would like to be able to tell you that I stayed abstinent from the eating disorder since that meal I had with friends, but that’s not my truth. I had stayed in remission for about a year and a half, but I failed to enlarge my spiritual life. And again, the thought of throwing up became a solution. I battled with it again on and off for a couple of months, but at this point, I couldn’t tell you the last time I was active in bulimia/anorexia.

How did I do it? I didn’t. It’s a spiritual malady that requires a spiritual solution. The war in the mind has quieted, and the conflict in the soul has smoothed out. The only thing that I did was burn my life to the ground and get to a place of enough pain to where I was in a position to take any suggestions  I did not want to stop drinking at the age of 26. What I wanted was to wake up and not dread the hours ahead. I could not handle reality. Life was painful and difficult. And left to my own devices, I constantly sought external solutions for an internal problem. In all the misery I just kept moving my feet. Taking suggestions from those who had come before me and who had made it through.

Nothing about my path has looked linear. But I do believe with all my heart that nothing is wasted in God’s economy. Everything was and is always perfect, despite how painful it might be.

Today,  I am very active in Cincinnati’s recovery community. In the past nearly five years, I haven’t always done what’s been suggested. I’ll get away from my 12 step meetings and all it entails, and it’s no surprise when the noise starts getting louder and louder and my world gets small all over again. But because I have trained feet, I Just keep trucking, and everything always works out just as it is supposed to. I have a beautiful life today. Do I walk around grateful all of the time? No. But I do always walk around free. Free from self-hatred that I have replaced with love. I would never just give anyone the gift of recovery. I wouldn’t want to rob them of their journey.

When it comes to food, it amazes me daily that I enjoy meals with people. If I want a piece of my grandma’s pie at Thanksgiving, I “eat the damn pie.” I get to participate in life today. I love myself most days. I’m not afraid of the world. The best way I know how to be of service to those in need is to tell my story and rock my truth. Secrets kept me sick. Resentments kept me sick. The need for “your” approval kept me sick. Today I am enough just as I am, and the miracle is that I believe it.