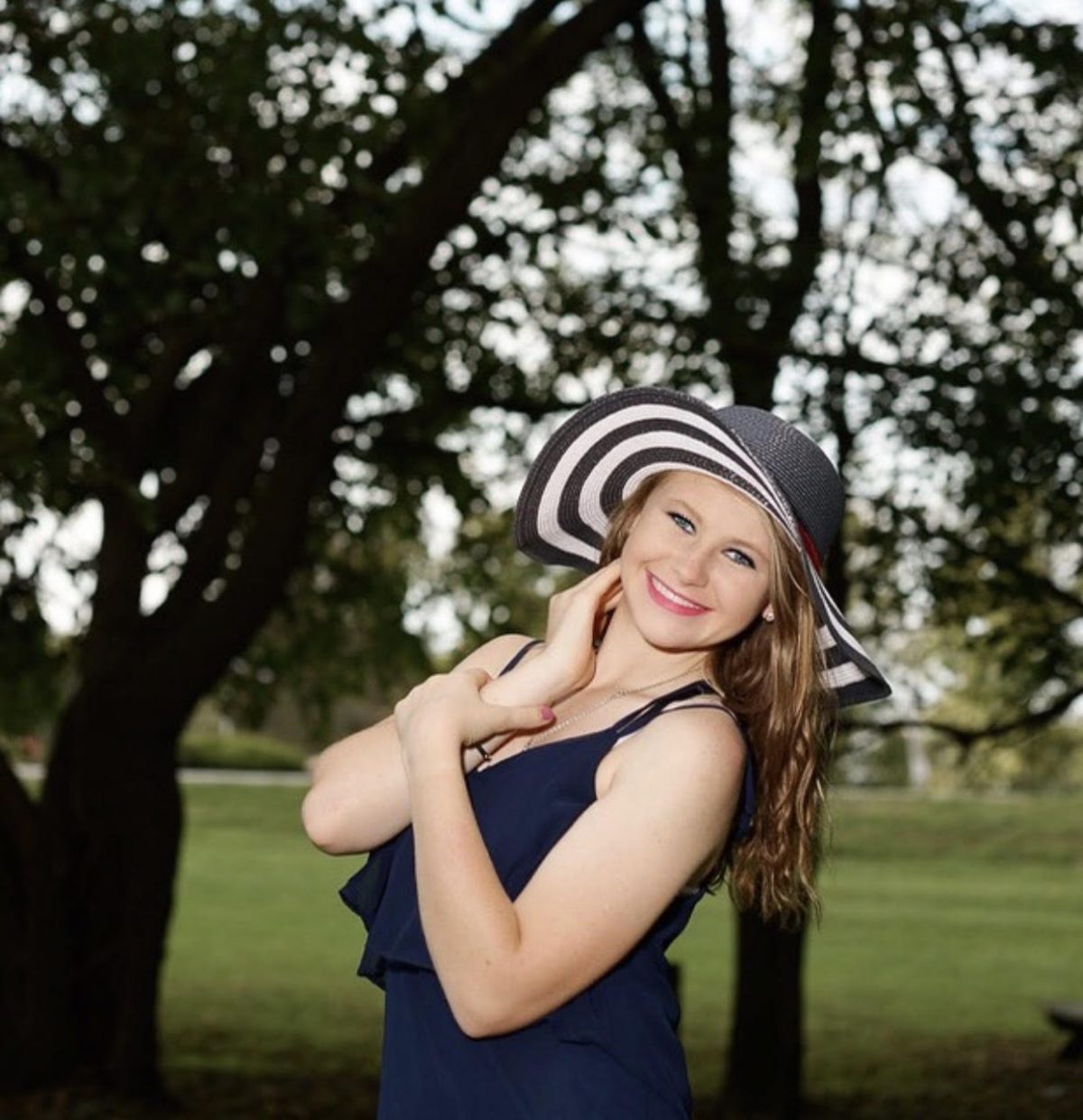 Hey loves! My name is Brooke and I’m from Batesville, IN. I started to experience eating disorder symptoms at the age of 12, in the 7th grade. The symptoms grew more severe until I was 14 years old. At age 12 I started to have suicidal thoughts, then that lead to depressive thoughts and  anxiety.

My parents got a divorce when I was 9 years old; that was really hard on me as I didn’t understand why they were separating. As a kid, I thought it was my fault because I annoyed them. In my high school years I was very involved with sports. I did cheer, dance, golf, and basketball. This is where the body image issues came into hand. Body image became a part of my daily life and daily thinking because of the sports I did I thought I had to be stick-thin and had to weigh a certain amount. I even thought I had to look muscular and perfect. Body image is one of the worst things that came into play in my life. I still today have a negative body image.

Freshman year, I started to go on a diet and started to watch what I ate. First, I became a vegetarian. I went a week without eating meat and then after a week, I went back to eating meat. Then, I began eating small portions at meal times. I would sometimes skip some meals too. Before I knew it, I wasn’t eating at all yet I was still working out. I would go for 7-mile run and do a 3-hour workout each day, sometimes more if I had the time.  I started to count my calories and started to work out after every meal.

My family didn’t think I had a problem at first, it took a couple months until they saw a difference in my weight and my table behaviors throughout the day with food. Later in December, 2013 I was finally diagnosed with anorexia nervosa, a type of eating disorder. Anorexia nervosa is where you restrict or suppress your appetite for food. It’s also an emotional disorder that is characterized by an obsessive desire to lose weight by refusing to eat. I began treatment at the Charis Center in Indianapolis, that same month and was treated until February of 2014 when I was discharged. This was my first treatment center. I was very scared and very nervous my first day there.

My mom made me go to Charis to get help and to become more understanding of what an eating disorder was. After a couple of months, I felt like the treatment wasn’t helping at all. I remember leaving school three times a week for treatment. A lot of people at school kept asking me why I was leaving all the time. It was so hard to answer those kind of questions. I was still new at learning what an eating disorder was, even though I had one myself.  I didn’t want anyone to know that I had anorexia; I was too embarrassed to tell anyone that I was struggling and that I had fear of food and of course the biggest, gaining weight.

The first time when I went into treatment, I didn’t know what to expect, I didn’t know what to do and what not to do. All I kept thinking was “What if they make me gain more weight than what I am suppose to gain?” When I saw my very first treatment doctor she said I was allowed to do my sports, which at that time I did track, but that decision may have not been the best for me. I then thought I was allowed to exercise all the time even if I didn’t eat that much. I was on several different meal plans, following certain guidelines on meal and snack times. Every treatment center does them differently, but here the meal plans were color coded and at first I didn’t understand what the colors meant but them I learned I was supposed to work my way up through the various colors, increasing my caloric intake as my body got used to food.  Sometimes not everyone goes all the way to the highest meal plan, but of course I had to. I had to because I was still exercising a lot and I would burn off everything I ate, so I needed more calories.

I would go to the treatment center Mondays, Wednesdays, and Fridays for 8 hours in order for it to be considered a Partial Hospitalization Program (PHP).  There were girls experiencing all different types of eating disorders at the treatment center. We would participate in group discussion to try learn how to cope with our thoughts regarding body image, learn distracting tools, and try to work on our thoughts and feelings around food, family members, and friends. We would have an art group on Fridays and on Mondays, as well as a class called DBT (dialectical behavioral therapy). That is where our parents would come and also learn how to help.

Helping a loved one struggle with this illness is very difficult. I remember when I would cry over a turkey sandwich and would throw a huge fit and say “I’m not eating this, it’s too many calories!”. My mom would just cry and cry until she couldn’t cry anymore. My illness not only came at a high cost to me, but it also has taken away my relationships with family and friends.

After being at Charis for couple months and realizing that my condition was not improving, I was then admitted in Cincinnati Children’s Hospital for two weeks due to a low heart rate. My mom stayed with me those 14 days. The dietician picked all my meals and snacks for me, but I did have a say in somethings, unlike at Charis. The worst part was that I was put on bed rest. The nurses would wake me up at 5am to check my weight, vitals and labs. Whenever I got weighed it would be a blind weigh which means I wasn’t allowed to see my weight each time.

After those 14 days in the hospital I was discharged and went to a treatment center in Anderson, IN which was called Selah House. Selah House was my first inpatient program where I did not have my mom, was not allowed to go to school or sleep in my own bed. I was there for three months. It was a very different setting and atmosphere for me. All the girls ate the same amount of food at meals but the snacks were different. All the girls shared a room and bathroom together. The staff supervised us 24/7.

After my stay at Selah, I went home for a few months and relapsed again, so my mom took me to the Eating Recovery Center. My mom and I moved to Cincinnati while I sought treatment there. I was there for 5 days and found out through an EKG that I had a 3rd degree heart block and had to go straight to the hospital immediately. During the two weeks I was there, my roommate and lots of friends came to visit me.

After being at ERC for three months, I was discharged and resumed my daily living. Unfortunately,  I relapsed again and this time I had to go back into the hospital due to my low heart rate. When I left the hospital, I was sent to Laureate in Tulsa, OK. This was the farthest place I had ever been for treatment. I stayed for 3.5 months in the adolescent program. In March of 2017, I was very suicidal. One night, I attempted to take my own life by taking some pills before laying down with my mom. This resulted in me having 15 seizures. I was taken to CCHMC in an ambulance and spent a week in the ICU and another week in recovery. After regaining consciousness in the hospital, I was restrained because I was violent towards people and tried to remove my IVs. This was the most difficult thing my mother had to witness.

They forced me to eat a meal or a snack every two hours, which at the time I felt like was the worst thing ever. However, this time I was able to make my own food choices. Being away from my mom for three months was a big struggle. We weren’t allowed to have our phones throughout the day and we only got a 10-minute phone call each night from a family member. After I left Laureate I thought I was really well and was in a good mindset. I was ready for recovery. I was home for almost two years before I went back into the hospital this year due to a low heart rate and was there for seven days. I am currently back at Laureate in the adult program. I have been here for almost two months. I was initially in the adolescents program but moved up because I am wanting to go to college and for that I need to learn how to handle my eating disorder on my own. All of this has changed my life. The nurses have inspired me to become a pediatric nurse. I am going to Indiana State University to study nursing in August of this year. I want to work at Cincinnati Children’s Hospital and be that nurse that can help any patient that is experiencing an eating disorder and tell them I had one too and am now 100% recovered. Recovery is possible. That is what my goal in life is to say and is to be.